Lorem Ipsum is simply dummy text of the printing and typesetting industry. Lorem Ipsum has been the industry's standard dummy text ever since the 1500s

Every Next Level Of Your Life Will Demand Something

We are the champions, we do not give up, we try 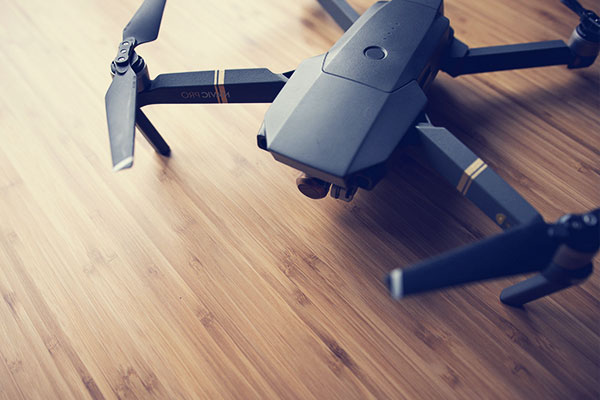 For a start, these prolific manufacturers have fitted the Dropho 4 with Drone Camera Go, a fully-automated system that makes this drone.

Dropho is a small camera-equipped drone that can be worn as a wrist band Dropho can be activated to unfold into a quadcopter, fly in one of its pre-programmed modes to take photos or a video, and then return to the user Competing against more than 500 other participants, Nixie's developers became the winning team in the development track of the Intel's Make It Wearable competition on November 3, 2014, thus securing $500,000 in seed funding to develop Dropho into a product The developers stated their goal to develop the drone into the next generation of point-and-shoot cameras.

Providing a Wide Choice of Drones

When you need your company to have a new website or if you venture on updating your old webpage with a new look and functionality, the choices are versatile. Assuming that you will go the easy way and choose a theme for your WordPress website, the overall number of characteristics... 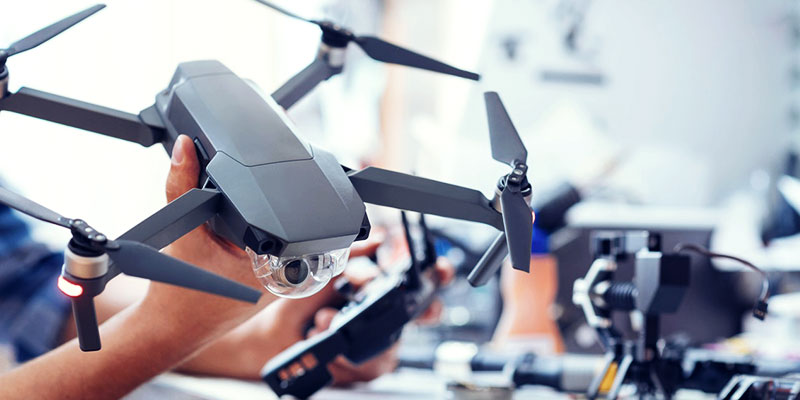 Even though a wearable camera drone was suggested to have applications in rock climbing, mountain biking, and other adventure sports, in November 2014 the developers announced plans to market Dropho to a niche audience of rock climbers first, before expanding to a general audience Dropho is a drone that unfolds into a quadcopter and is worn as a slap bracelet.

According to Wired the first Nixie prototype was built by Christoph Kohstall. After tinkering with a quadcopter that he received as a gift, Kohstall built a drone model of eyeglasses with propellers, as well as a prototype that could dive underwater and then reemerge from under the surface To better address the poor usability of quadcopters, he then had an idea to create a "flying wristband" with a camera Kohstall's partner Jelena Jovanovic was involved in creating the first prototype and later became the project manager Together with Michael Niedermayr, Kohstall and Jovanovic entered the 2014 Intel's Make It Wearable competition as team Dropho led by Kohstall.

We Capture Memories From Above

Although quadrotor helicopters and convertiplanes have long been flown experimentally, the configuration remained a curiosity until the arrival of the modern UAV or drone. The small size and low inertia of drones allows use of a particularly simple flight control system, which has greatly increased the practicality of the small quadrotor in this application Each rotor produces both lift and torque about its center of rotation, as well as drag opposite to the vehicle's direction of flight.

It can be equipped with a variety of additional equipment, including cameras, GPS guided missiles, Global Positioning Systems GPS, navigation systems, sensors, and so on. 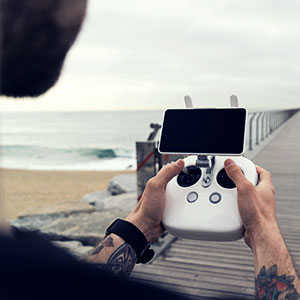 If all four rotors are spinning at the same angular velocity, with two rotating clockwise and two counterclockwise, the net torque about the yaw axis is zero, which means there is no need for a tail rotor as on conventional helicopters. Yaw is induced by mismatching the balance in aerodynamic torques i.e., by offsetting the cumulative thrust commands between the counter-rotating blade pairs The first heavier-than-air aerodyne to take off vertically was a four-rotor helicopter designed by Louis.

Unlike conventional helicopters, quadcopters do not usually have cyclic pitch control, in which the angle of the blades varies dynamically as they turn around the rotor hub. In the early days of flight, quadcopters then referred to either as 'quadrotors' or simply as 'helicopters' were seen as a possible solution to some of the persistent problems in vertical flight. Torque-induced control issues as well as efficiency issues originating from the tail rotor, which generates no useful lift can be eliminated by counter-rotation, and the relatively short blades are much easier to construct. 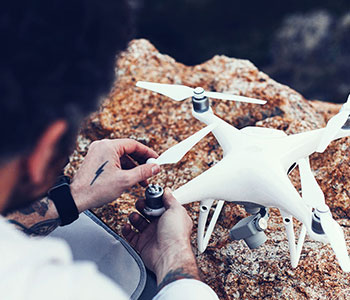 How to Start a Drone Photography Business...

suffered alteration in some form, by injected humour, or randomised which don't look even slightly. 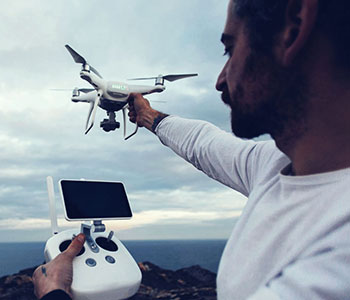 How Amazon is Integrating Drones into Their Supply...

suffered alteration in some form, by injected humour, or randomised which don't look even slightly.

Tips for the Drone Camera 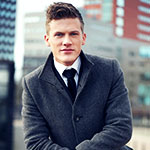 If all four rotors are spinning at the same angular velocity, with two rotating clockwise and two counterclockwise, the net torque about the yaw axis is zero, which means there is no need for a tail rotor as on conventional helicopters.

How Drones Are Saving Our Beaches...

How to Start a Drone Photography Business...

How Amazon is Integrating Drones into Their Supply...

We Use The Best Drones & HD Cameras

Tim Abell On How Drones Help The Environment

Andrew Simon On Top 5 Tips for Flying Drones Over Water

Tim Abell On 10 Etiquette Tips for Operating a Drone